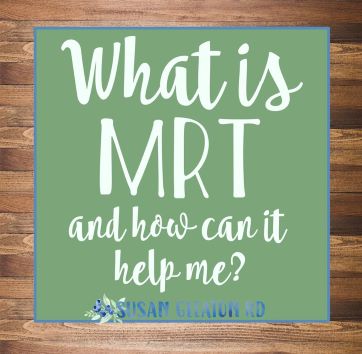 What is MRT and How Can It Help Me?

Anyone that knows me knows that I am absolutely crazy about a certain test  called the MRT.  I am so crazy about it because when my clients do that test and then follow the food protocol (officially called LEAP for Lifestyle Eating and Performance, but I call it ISR for Immune System Reset) that I lay out for them, they get fantastic results such as:  digestive issues disappear or greatly improve (bloating, gas, diarrhea, constipation, heartburn, nausea, etc.), skin issues improve (cystic acne, hives, etc.), and autoimmune symptoms lessen or go into remission (Hashimoto’s, Psoriasis, RA, MS, etc.).

MRT stands for Mediator Release Test, and it is flat out the very best and most accurate food sensitivity test out there. It’s a blood test, ordered by a licensed healthcare provider such as myself, and sent to a specific lab to be analyzed.

HOW DOES THE MRT WORK?

The MRT accurately measures the release of inflammatory markers, known as mediators, in your blood.  It does this by measuring changes in the liquids to solids ratio of your blood after it has been exposed and incubated with whatever food or chemical they are testing.

MRT accounts for all of the reactions by your immune system (not just the ones caused by antibodies such as IgG or IgA which is what most food sensitivity tests measure) to a food, and shows if they have released mediators or not.  This is important because it is the release of mediators that signifies the beginning of an inflammatory reaction.  It is also known that most chemicals (whether naturally occuring in a food such as caffeine in coffee or added to foods) do not elicit an antibody response, so they would not show up in an IgG or IgA antibody test.  And, along the same lines, our innate immune system doesn’t elicit an antibody response either.

The reactions are quantified and reported as either Reactive (Red), Moderately Reactive (Yellow), or Non-Reactive (Green), and further broken down by level of reaction within these categories.

The MRT is truly groundbreaking in its methods and results because it shows precisely the level of inflammation that each food, chemical, and spice causes in YOUR body. No two results are the same because no two people are the same. It’s very fascinating to me! 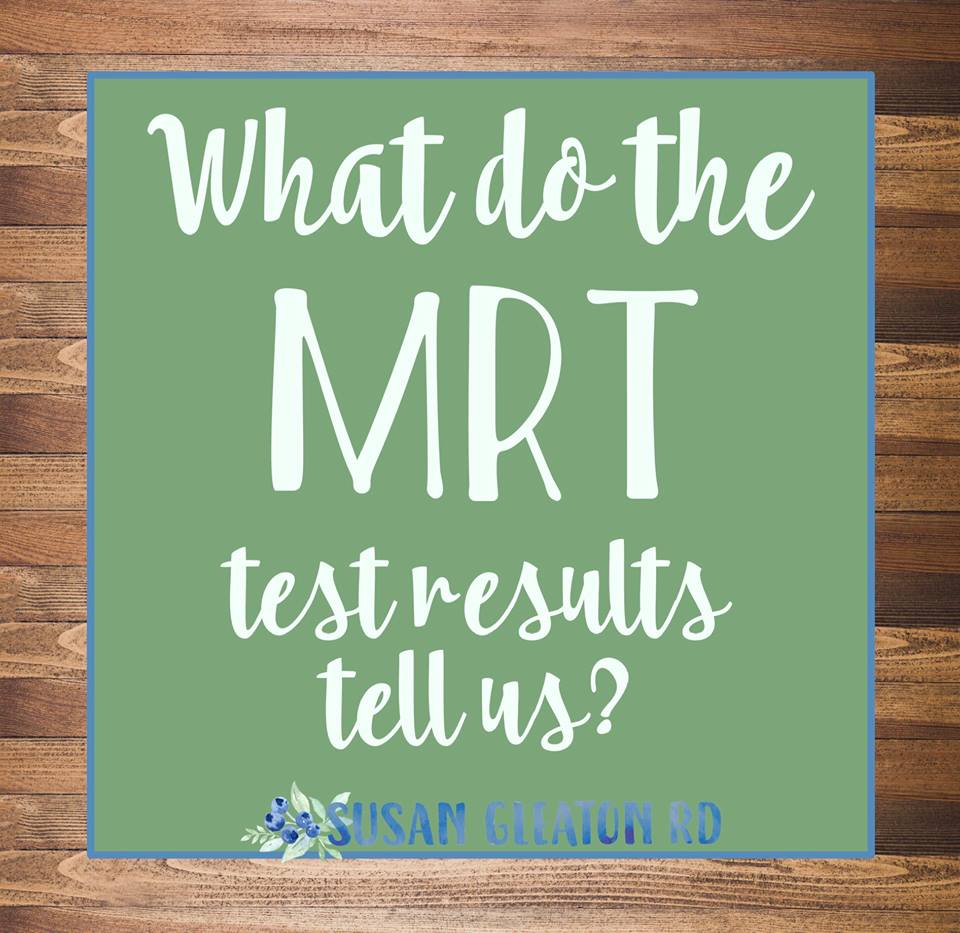 Once I have your MRT results, I will make a list of the foods that you CAN eat. These are the foods that you tested “safe” for. They are the lowest of the “Greens” on your test results. Then, together we will develop a plan enabling you to eat only these lowest reactive foods for 6-14 days, depending on your results.

This is an exciting time because most people experience a significant reduction in their symptoms. This is the first phase of your Immune System Reset, or LEAP, protocol.

Then, in the second, third, and fourth phases, your food  list will be expanded several times, adding in slightly more reactive foods each time.  This is done in an easy, systematic manner that is all laid out for you in a very understandable way.  The cool part is that, after enough time has passed, you even get to add in foods that you previously were reactive to!

Also, while going through these phases, you’ll follow a protocol I set up for you to rebuild a healthy gut wall. At first we will make use of supplements to do this because they can make an impact very quickly. After that, you can choose to use certain foods or a combination of food and supplements to keep a healthy gut wall. After all, it is an unhealthy gut that causes food sensitivities to develop in the first place.

This is all done in my Better Digestion Blueprint program, where you get tons of support.  After our one-on-one consult in which we go over your test results and design your food and gut healing protocols, you get even more support through a HIPAA compliant private chat.  And if you want to talk, just hop on a weekly Q & A done via Zoom, where you can both talk to me and also learn from the experiences of others going through the same program!

The end result is a huge decrease in symptoms, and hopefully an appreciation of how food really does affect your health. I also hope that I leave you with a desire to continue to make good food choices so that you stay in the best possible health.

There are a confusing number of food sensitivity tests on the market. They all claim to be the best, but they measure different things. Some measure just IgG. Others measure both IgG and IgA. And yet others measure the release of mediators in the blood.

The IgG and IgA tests are quite common and they measure how much IgG (immunoglobulin G) or IgA (immunoglobulin A) you are producing to a specific food, with the assumption that high levels of these antibodies are always a bad thing. But there are limitations of this testing: 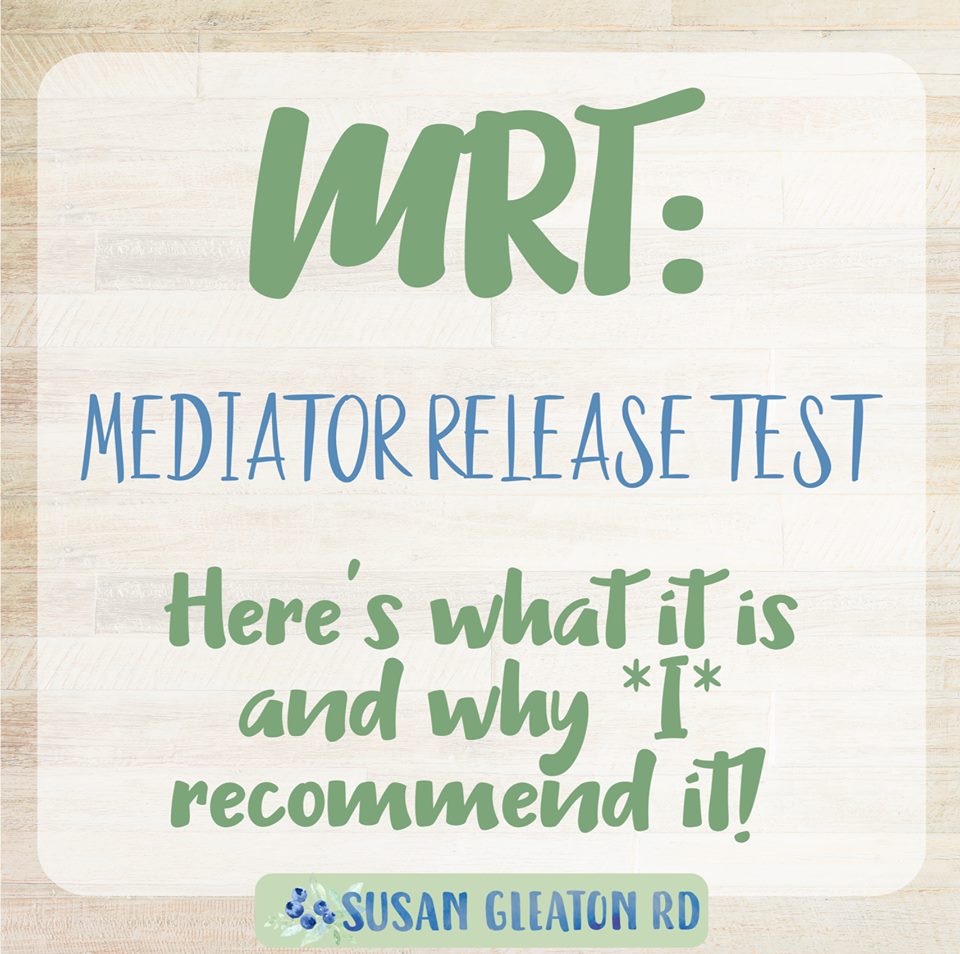 There are two blood tests that are called “release of mediator” tests, and they measure exactly what we want to know – Type 4 hypersensitivity reactions because those are the types of reactions that are causing inflammatory responses in our bodies.

First, what are mediators? When there is a triggering mechanism (such as an ingested food), the body activates white blood cells, which then release mediators (such as histamines, prostaglandins, cytokines, etc.) into the body. The release of these mediators are what cause symptoms, such as brain fog, muscle aches, and digestive and skin issues.

The two tests that measure the release of mediators have an interesting history.

The ALCAT test, invented in the early 1980s by a team led by Dr. Mark Pasula, was the first test to look at the release of inflammatory mediators rather than antibodies. for food sensitivities. Over time, Dr. Pasula developed a better way to do this, but ALCAT wasn’t willing to implement it. Therefore, Dr. Pasula formed another lab in order to apply what he had figured out, ultimately creating a more accurate and reliable test.

The test that Dr. Pasula formed is called the Mediator Release Test, or MRT, and it’s similar to ALCAT, but much improved.

In 2013, Dr. Allen Bonilla, D.C. of Los Angeles, wanted to know which test, the ALCAT or the MRT, would provide the most accurate results. He took blood samples for three ALCAT tests and for three MRT tests on the same afternoon and submitted them to the lab. When he looked at the results side-by-side, it was evident that the ALCAT results changed radically from sample to sample, while the MRT results were practically identical for the three submissions.

I use the MRT. I have done it myself (twice!), several of my family members have done it for various reasons, close friends of mine have done it, and a whole bunch of clients have as well.  ALL with amazing results.

No other food sensitivity test accounts for the numerous complexities of food sensitivities as well as MRT, and I think EVERYONE can benefit from this testing.

I have carefully laid out a program that even my clients with extreme health challenges benefit greatly from.  It’s called The Better Digestion Blueprint, and you can find out all about it here!